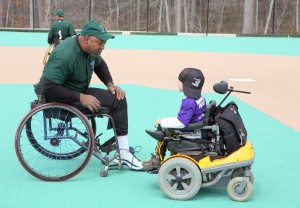 This statement, extracted from a book by Nobel Laurette Professor Yuval Noah Harari

SAPIEN: A Brief History of Mankind

Over the last 15 year, the Miracle League has grown is size, scope and purpose.  Very dedicated people have come on board to help reshape our programs so the “athletes” continue to have fun, but at the same time learn and reinforce critical life skills necessary for a higher quality of life and greater independence . The Special Ed Professionals and therapists that design, facilitate and evaluate our programs have the skill sets to create that environment, and in spite of all the infrastructure, design and purpose embedded in the programs it is still fun. It’s not always easy, but it is always fun.

The value of the Miracle League to the community is continually being validated by not just the response of the parents and our phenomenal growth, but now there are State Agencies and Health Care Providers  (Emory Autism Center) coming to us asking us to expand our services because they are so unique and so valuable to certain segments of the Disability Community. The Georgia Medicaid office was so interested in our programs that they expedited the certification process.  We are now a Certified State Medicaid Service Provider.

After 18 years it is still difficult for some of us to articulate the “Issues” because they are so varied from child to child and family to family. And if we can’t effectively articulate the issues, why would people see the need for solutions. The children and youth we serve have a broad spectrum of disabilities, physical, cognitive, behavioral, some are medically fragile, some chronically ill and some terminally ill. And the number of disabled children and youth in our community is far greater than most people realize.  Children in wheel chairs and walkers are only a small part of the disability community

AS DIFFERENT AS THE DISABILITY ISSUES MAY BE FROM FAMILY TO FAMILY, THERE ARE SEVERAL COMMONALITIES

ISOLATION:  When a child is born with or acquires a disability through disease or trauma…friends and even some members of the extended family find time together awkward.  They don’t know what to do or what to say, so they gradually drift away. It’s just easier that way, for them. As a result the family becomes isolated, and the insular life becomes a pressure cooker of guilt, recriminations and overwhelming physical, economic, and emotional demands.  Nationwide eight out of ten families fracture within a very short span of time. And typically it is the mother that is awarded custody.

THE SINGLE MOM:  Custody for a single mom entails all of the typical maternal responsibilities and significant portions of paternal responsibilities. The mother is, or may become, the sole source of income. There may be other children in the family, able bodied siblings.  So much to say grace over in addition to the demands that result from her child’s disability .  But….when she finally comes to a Miracle League event she will recognize kindred spirits and those kindred spirits become her new support/social network…..there for her, there for each other, in good times and times of crisis. This was an unexpected consequence of the Miracle League Mission, but definitely something we now recognize and facilitate.

THE ABLE BODIED SIBLINGS: Living in the shadow of a brother’s or sister’s disability has a huge impact on the life of the sibling.  An equitable distribution of resources, affection and positive affirmation is simply not possible. There simply isn’t enough time and energy even in a two parent family, and even less in a single parent household. Over the years this imbalance takes its toll, and many children come to believe negative attention is better than no attention at all. The chemistry of puberty makes things even more dramatic. The boys become outwardly aggressive. Girls seem to turn their frustration inward. Their negative behaviors revolve around self-destructive thoughts and actions. It can reach the point where they physically harm themselves and without intervention and therapy some begin to ideate suicidal thoughts.  Some have tried, and some succeeded.